We rose about 4 a.m., Mt Olympus, disgusting to say, invisible — considering I had made a huge careful sketch mainly depending on its appearance. A very wretched night we had passed! Gnats, flies, fleas, and other beasts! My arm got a fresh hurt in getting out of bed, and is very odious. Altogether I was thoroughly unwell. We got off by 6 or 6.30 a.m., young Leeves, who goes with us to Thermopylae, joining our party. I could not ride, so walked away down to Oreos, a foolish Port, of 6 or 8 houses. Here they said Lamia (Zeituni) was quiet. Long delay about two boats — 80 drachmas asked, but 60 taken eventually. Longer delay about embarking horses — Janni’s won’t go. At last he says he can get others at Stylidha, so we go without them. Church and I believe this to be a dodge of old Chinaman,[41] to prevent his horses being seized. At last he paid his men, and we got off in one boat, after a long discussion and refusal to pay more than 30 drachmas. If we should get no horses at Stylidha — what a fix!! A captain of a ship of war tells us that Lamia is quiet and that General Gardikiotis is there.[42] The sea is bright, blue and calm, and I, by this time, tolerably placid. Only Janni and the cook, Christodoulos, are with us. Let us hope for a short passage! Boo! Up to 3 p.m. we had a light wind, or none, but in our favour; then it changed, and we tacked and tacked and tacked, I at the bottom of the boat. The view of Parnassus and of the Thermopylae range of hills is really stupendous. {sketches 83, 84?} Arm always very bad. Tacking went on till 8 p.m., when, current being against us as well as wind, we anchored for the night. Tea — and some cold meat is the boat dinner or tea. 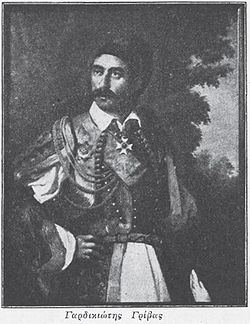 [42] Grivas Gardikiotis, a veteran of the Greek War of Independence and commander of irregulars fighting on the King’s side in 1848.